Behind the Scenes with Shark Tank "I've Always Wanted to Visit There in February..."

The words Kevin uttered during our first Shark Tank appearance will live in infamy. From that statement came the concept of getting Kevin O'Leary to Fargo in February to not only see how we've been doing for the past year, but to get him out on a frozen lake to do some ice fishing!

The logistics were kind of a nightmare. First, fly everyone to Fargo. Then get them all out to 'the lake' (if you're from anywhere in the upper central midwest region, you'll know that everyone has a lake place and goes there frequently. Eg. "So...you headin' to 'da lake this weekend? Oh yah, we'll be at the lake.")

The Shark Tank film crew flew into Fargo on Thursday, the day before filming, to meet the team, discuss wardrobe, and scope out locations at our warehouse, the ice house, and the lake (and do a little ice fishing themselves!).

Famous bad-ass athlete Christmas Abbott flew in late on Thursday and the guys in the office pretty much arm wrestled each other to see who would get to transfer her from the airport to her hotel. Ryan was lucky enough to get that assignment!

We recently teamed up with Christmas to work together on our new app, PRx Fit. We thought it would be fun to integrate some of the shots we needed to launch the app with the Shark Tank filming. Plus, we wanted to impress Kevin.

Cut to Friday. Eric got tapped to pick up Christmas and take her to the lake for a photo shoot before everyone else got there for filming. He hated that. In the meantime, the Shark Tank crew was over at Brian's (Brasch, CEO) house interviewing he and Erik (Hopperstad, President). Once they finished that, it was off to the lake for everyone!

Kevin O'Leary joined the gang at that point for some cool shots on the lake, in the ice house, some filming, and then for a good old-fashioned fish fry! Fun on the lake!

Time to Head Back to Fargo

After wrapping up lunch, the lake gang loaded up to head back to Fargo, where the real magic happens (haha, our office & warehouse crew offers up a hearty RAWR to that comment!). We got to stay behind and get orders out the door and answer the phone and emails instead of traipsing around with famous people.

The Shark Tank crew got lots of shots of us packing up orders and going about our daily business. Kevin was on hand to ask more questions of Brian & Erik and go over more of the nitty gritty details of PRx Performance. Candids taken in between filming at our warehouse

And we had the photographer on hand to get some amazing shots of Christmas working out on our equipment. Hey! This lady's programming is going to be available on our new app, PRx Fit!

Perfect Way to End a Long Day of Filming

After filming, we all ran home to get our fancy duds on and came back together for an evening full of great conversation and food. It was a 'wonderful' way to celebrate the end of a successful shoot and toast to the future success of our partnerships! Terrible picture taken from my phone of Kevin preparing to give a toast.

The fruits of our labor (and the hard-working Shark Tank film crew, of course). 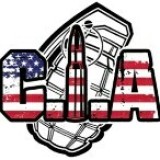 Where’s the perch? I don’t see 1 fish. Are you really not fishing? Lol!
#CIA_SavageScott @combatironapparel